Raising funds for the homeless

Raising funds for the homeless

Raymond Tan, the owner of Tan and Tan Lawyers has signed in to spend the night in Perth as a homeless person on Thursday, 17 June 2010. 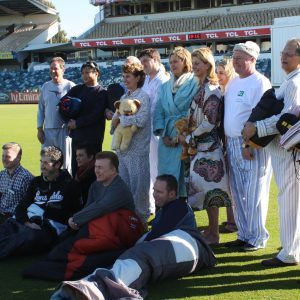 Raising funds for homeless in pyjamas. Lawyer to spend the night as a homeless person.[/caption]

The St Vincent de Paul Society is organising a Sleep Out for CEO’s to raise funds and awareness regarding homelessness. The first such event took place in Sydney last year. It is now a national event with CEOs sleeping rough on the same night Australia wide.

The sleep out for Perth will be taking place at the WACA whether it rains or not. There is a 55% chance of rain according to weather reports. The average temperature for 17 June 2006 was -7 degrees.

There are currently 82 registered CEOs for the event in WA. All participants are only allowed a sleeping bag. They may be given some cardboard if it rains. No food or alcohol is allowed.

Raymond has been a lawyer in Perth for over 20 years. He is also the only Asian public notary in WA. He has a beautiful wife and 2 young sons who he claims have been too privileged. Raymond himself comes from a poor family where he was the 9th child in a family of ten. His working class parents were lucky enough to be afforded public housing in Singapore.

There are 14,000 persons who are homeless in WA. That is a shame considering WA is a boom state because of the mining industry. However, public housing in WA has failed to keep up with the rising demands.

The global financial crisis and continued rising interest rates have not helped many families who are struggling and at the tip of being homeless. The most common reasons for homelessness relate to domestic and family violence.

Like Raymond, let us appreciate what we have in life and be thankful that each night we live in the warmth of a home with a roof over our head. In our comfort, spare a thought for many out there: men, women and children, whom due to no fault of theirs, end up cold, hungry and homeless.

to make a donation.
Remember, all donations over $2 are tax deductible.

Please, help Raymond and the St Vincent de Paul Society to help the homeless of WA.